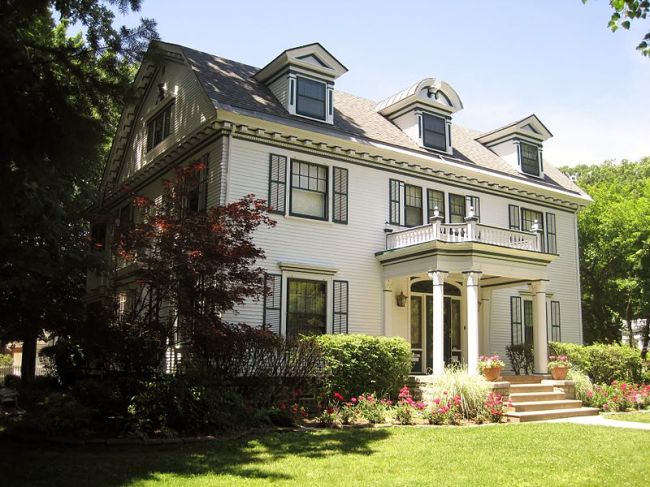 Historical note: During the 1990s, Kankakee, IL, held the nation’s highest per capita crime rate. Throughout that time, professors from the local university often purchased homes in Kankakee proper in an attempt to gentrify the area. The following work of fiction is inspired by events from that period.

Jenna twists the knob on the dash and cranks up the volume until her car windows vibrate to the pounding beat. The librarian peels out from the stoplight at the entrance to Olivet Nazarene University. This time, she remembers to turn left, not right.

Few circumstances could cause Jenna to be angry about moving from the cramped apartment she and Jeff called their “love nest” into a historic three-story home along the river. The biggest problem lay in the fact that their new home was on the Kankakee River. Good old K3, home of the three Ns—nuns, nuts and Nazarenes. Except, the nut farm had been steadily evacuated over the past decade, thanks to Ronald Reagan. Also, with the declining population of devout religious types, a non-Catholic could live here for years without consciously running into a nun. The Nazarenes, now intentionally listing Bourbonnais as their location, had left Kankakee with no Ns. Instead, the city wallowed in the shadows of the giant C—crime—as its sole claim to fame on the eve of the 21st century.

Because of crime, Jenna lives in Kankakee. She married Jeff as he was finishing at the police academy. His ambition to become a criminologist fit naturally into the course set by his first industry job with the Bradley Police Department. Then Jeff got bitten by the crime-fighting bug.

When the Kankakee police force had to replace a fallen officer, Jeff, wishing to abandon his desk and make a difference on the streets, took the job. Before he could take over the beat, he had to move into the jurisdiction.

Although Jenna expressed her dismay over her husband’s choice, she didn’t wish to stand in the way of his happiness. Although she balked at the thought of moving into crime central, her bargaining chip to keep Jeff out of the line of fire was wrenched away when a professor from the university presented a solution to the housing issue. The professor, leaving on an overseas sabbatical, needed someone to live in his house for the next year.

Jenna rides the brakes as she careens along Kennedy Drive. The river appears to her right as she prepares to turn onto Court Street. She glances at the numbers on the dash, 11:24. She’ll be home before midnight but hates the thought of entering the unfamiliar house after Jeff has left for his graveyard shift.

Arriving at the house, Jenna turns the stereo down from “drive by myself” volume and cuts off the engine. She takes a deep breath and forces her heart rate to slow. No one but Simon Bolivar is waiting for her to come home. The thought of the big, sweet cat brings a smile to her face.

Simon Bolivar doesn’t  greet Jenna at the door when she enters the house. He is, after all, a cat. A sense of foreboding still nags her. Trying to shrug it off, she heads toward the kitchen in search of comfort in a cup of hot tea.

The furniture in the living room casts great shadows on the wall as Jenna passes through. In the formal dining room, she stops cold. What’s that sound? It can’t be—but there it is again. Terror threatens to overwhelm her as she realizes she isn’t home alone.

Slowly, Jenna turns around, taking care not to make any abrupt movements. She scans the room, searching for the source of the heavy breathing that has betrayed her intruder. Her heart, pounding in her ears, grows almost as loud as the sound of the intruder’s respiration.

Jenna follows the sound. In the living room, by the light of two table lamps, she makes out a dark form in the wingback chair. Simon Bolivar’s steady breathing breaks into a jagged snore, and Jenna realizes her mistake. Trying to laugh, she feels tears forming as she scoops up the troublesome lump of fur and gives him an affectionate squeeze. “You scared me to death, Bo.”

His steady purr helps calm her nerves. When she finally sets him down, he stretches and follows her into the kitchen. Thankful for the company, Jenna gives him a treat while she waits for the tea kettle to sing.

The kettle has just begun its chorus when Jenna hears the sound that makes her heart sink—sirens. The long-short wail indicates that squad cars are dashing toward a crime scene. Jenna breathes a desperate prayer for her husband’s safety. The sirens cut off. Silence.

Jenna can’t tell whether or not she imagines the gunshot she hears before the ambulance’s  high-low wail shrieks in her ears. She regrets both her Vulcan hearing and her overactive imagination. Still, her concerns find a foothold in reality.

Worry stretches the fabric of time. Jenna wills the phone to refrain from ringing. If Jeff is safe, no one will call. When the silence becomes a burden, Jenna locates Jeff’s Enya albums and loads them into the CD changer. Sometime after 4:00, she nods off in the wingback chair. She awakes shortly after 5:00, disoriented. As the sounds of the past several hours replay in her memory, she realizes that the morning news will now be educating the masses concerning any overnight shootings, if any actually occurred.

Before long, she discovers that she had indeed heard a gunshot last night. She feels a flood of relief upon learning that the victim was a civilian.

Before stretching out on the couch to await Jeff’s homecoming, Jenna calls Benner Library. She hasn’t taken a sick day in months. No explanation will be necessary.

Jeff arrives home to find Jenna sound asleep in the living room. She stirs as he plants a kiss on her forehead. “Not heading to work this morning?” Looking into her eyes, he understands. “You heard the gunshot.” He exhales. “Sweetie . . .” He unbuttons his shirt to reveal the Kevlar vest beneath. “You need to stop worrying so much.”